wandering pieces of his soul 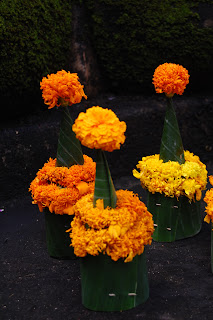 "there are times when we need to undergo a ritual to recollect the souls we left in places we have visited."

"this white string tied around my left wrist means that i recently underwent a ritual in my hometown to recollect my pieces. and i can't just give this if you mean to ask it from me. this one is special for me."

he was told that when persons travel to different places, they always leave a part of themselves - fragments of their souls. in some instances, they require a certain kind of ceremony to re-unite the lost fragments and make them feel whole again. it did explain a lot of things about himself - how fragmented he may be feeling possibly from the pieces left wandering in the various places he had visited and seen. it was as if he had left in himself almost none a soul at all with all the pieces scattered and possibly awaiting recovery.

in his last journey, it seemed that he left none when he returned home - leaving what little soul left he had to that last place. no wonder he had been feeling forlorn - perpetually listless and wistful.

if ever he would intend to reunite himself with all his other fragments, a white string borne by a ceremony to recollect all that had been unintentionally left and scattered. or the need to return in this lifetime to reclaim his pieces - from those who may have unintentionally held on to them - a woman possibly that could have stolen his affection, or a vocation to relocate. or perhaps, be reborn in these places to relive what secrets these places held that enamored parts of his soul to stay.

Email ThisBlogThis!Share to TwitterShare to FacebookShare to Pinterest
Labels: writing

How are you man??
Just a Thought on the Rituals - Well Do you Practice such kind of Rituals, Well I know in Bhutan rural people does when they travel to a different place. Looks a Buddhist Belief. I hope i am not mistaken !!

ey ugyen. it was actually a thai friend (who is buddhist) who told me about this.
on a christian (catholic) belief, i don't remember having a similar ritual. but it seems that we might have an indigenous or traditional belief similar to this.

if i may follow this belief, it could be possible that i need to recollect the pieces of my souls from the places i have visited.